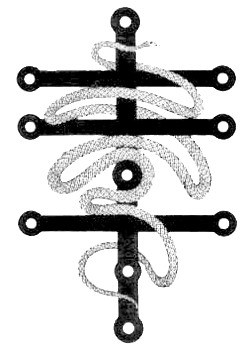 In Aleister Crowley’s magical system of Thelema, the serpent Choronzon is the ‘dweller’ in the Abyss, the final great obstacle between the magician and true enlightenment. Choronzon is known as the ‘Demon of Dispersion’, and described by Crowley as “a temporary personification of the raving and inconsistent forces that occupy the Abyss.”

The name Choronzon though popularized by Aleister Crowley, first occurred in the Enochian records of John Dee (a consultant on many issues to Queen Elizabeth I) where Choronzon is synonymous with the serpent of the garden.